Back in March last year I bought tickets for the Impractical Jokers 'Santiago Sent Us' Tour.
Now if you don't know who the Impractical Jokers are then I will explain, they are 4 American friends who are comedians, pranksters, whatever you want to call them. They have a show on Comedy Central where they set each other challenges such as going out on the street one by one and the other 3 tell them things to say or do via earpiece, if they fail to do what is said then the person who fails the most has to do a forfeit... usually something really embarrassing. 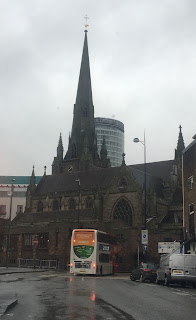 The men came to the UK to film a series and decided to do a tour of some the stadiums whilst here. I had no idea how they were going to do a stage show but thought we'd go anyways to see if it was any good & I had wanted to go to Birmingham as I had never really been. I wanted to visit the Bullring & also go to the sea life centre, I went when I was 13 years old but obviously that was a long time ago.

So we travelled up on the Thursday, went straight to the Bullring, to be honest it wasn't as amazing as I thought it was going to be. It looked lovely inside and out but shop wise it was pretty much the same kind of thing as St Davids Centre in Cardiff. I did however really like Forever 21 which we dont have. After a little shop around we went to our hotel room. We only booked a Travelodge as we didn't plan on spending much time in there. What we didn't realise is that we had booked the one that was on the main street next to all the pubs and a very short walk to all the places we wanted to go.. happy girlies ! :)

We went for a meal to SmokeHaus, I had an amazing Mac 'n' Cheese sandwich & D had ..... After this we went to the Wetherspoons for a few drinks. The Friday we went for breakfast before heading to the Sea Life Centre, we walked around once & then went for some food at a pub on the canal, I want to say The Moathouse, we returned to the Sea Life Centre for another walk around as at this time we were hoping the school children would have left, luckily they had. We both enjoyed the second walk around more. 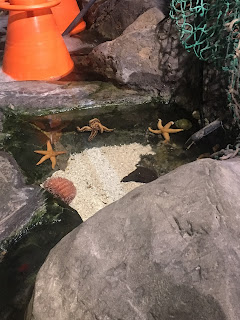 Back to the hotel to get ready for the evening, our Impractical  Jokers event at the Barclaycard Arena.
We had great seats in the arena, great view of the stage. The actual show was okay, it felt scripted (& upon talking to others seems to be true) but it was funny. They showed clips of some antics in London & did some "stand up". My favourite part had to be the eyebrows they drew on one of the men who had to walk around the streets talking to people. The warm up act Owen Benjamin was really funny & I have found a new person to follow on twitter.

Did anyone else get up to anything interesting lately? 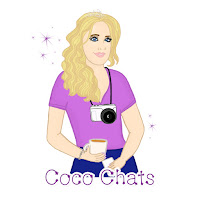